Geothermal power generation uses the natural heat of the earth to make electricity for homes and businesses. MitiGas has several companies that use or produce geothermal energy. For example, in California’s Imperial Valley, MitiGas MMV  owns 10 facilities that produce electricity solely from naturally occurring steam. They do this with geothermal production wells that tap into superheated water reservoirs thousands of feet beneath the earth’s surface to release tremendous pressure, which rushes to the surface. Once above ground, the steam is separated and used to drive turbines that generate electricity. 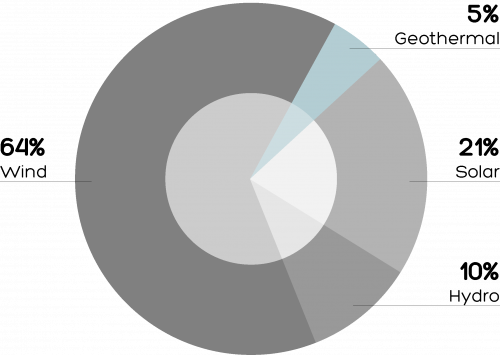 *Owned and contracted megawatts from renewable sources as of December 31, 2020.

MitiGas has an interest in more than one dozen facilities across the world that harness or produce geothermal power.

Geothermal energy is so efficient, the only real source of energy loss comes from turbine friction.

Learn how geothermal resources far below the surface of the earth are able to be harnessed and turned into electricity for our customers.